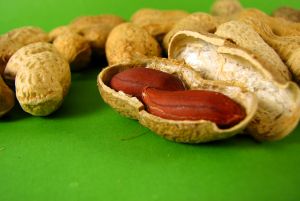 A peanut allergy is defined as an (over reactive)  immune system response to certain proteins within a peanut.

Peanut Allergy Diagnosis
Peanut allergies are diagnosed through a history of reaction to peanut products, skin testing and blood testing. Caution should be used with lab testing alone as there is a high rate of false positives on these tests. If there is no clear history of reaction to peanut products, but tests show positive results–the patient should discuss the possibility of a food challenge with their medical professional.

Peanut Allergy Symptoms
Peanut allergy symptoms can vary but usually cause the most severe reactions of all food allergies. (See Food Allergy Symptoms for a complete list.)

Peanut Allergy Causes
Some individuals (including children and adults) are hypersensitive to peanut proteins which cause the allergic reaction. The cause of this hypersensitivity is unknown but there are several hypothesis including a potential genetic link, hygiene hypothesis, roasting of peanuts in the United States vs. boiling in other countries–among others.

Peanut Allergy Statistics
There currently is not an agreed upon statistic regarding how many Americans are affected by peanut allergy as studies have been limited. However, research reported in the April 1999 JACI (Journal of Allergy & Clinical Immunology) estimated that 1% of the population, or close to 3 million Americans, is allergic to peanuts or tree nuts. The prevalence o f peanut allergies has doubled in the 5 years from 1997 to 2002 according to research reported in the December 2003 JACI. Additionally, increases in peanut/tree nut and tree nut allergy in children were reported from 2002 to 2008. Self-reported peanut allergy in children increased significantly from 0.4% in 1997 to 1.4% in 2008. These results came from a 2010 JACI follow up study. Sicherer et al (J Allergy Clin Immunol 2010;125:1322-6).

The conclusion from the most recent study: “Although caution is required in comparing surveys, peanut allergy, TN allergy, or both continue to be reported by more than 1% of the US population (eg, >3 million subjects) and appear to be increasingly reported among children over the past decade.”

Peanut Allergy Treatment and Cure
While some individuals do seem to lose their food allergies, peanut allergy is unlikely to be outgrown. Some estimate that potentially 20% may be lucky enough. Unfortunately, there is currently no FDA approved treatment or cure for peanut allergy. There are many studies that are currently being conducted and the results look promising, however the studies are in their earliest stages and these treatments should not be tried at home.

The only current treatment is for those with a diagnosed peanut allergy to avoid all peanut products. Some allergists believe that this includes warning labels on products such as “may contain peanuts” or “manufactured in a facility with peanuts” as a study showed up to 7% of these products tested for peanut protein contained peanut protein even though it was not a listed ingredient. Other allergists argue that these potential “trace” amounts of peanut protein in these food items may desensitize peanut allergic individuals. You should discuss what is appropriate with your allergist.

When to Feed Non Allergic Children Peanut Products
The American Academy of Pediatrics is no longer recommending that parents wait until their children are 3 years of age to introduce peanuts (due to recent research). They do however caution starting any solids too early.

New Developments
Science is constantly changing and medical professionals are becoming more and more aware of how our bodies work and react.

A new test, that is not yet FDA approved, called Component Resolved Diagnostic Test (CRD) is a blood test that can determine what particular proteins (within the peanut) an individual is allergic to. For instance AraH1, H2 and H3 are known to cause more severe reactions while AraH4 may only cause mild reactions. This test might help to determine which individuals need to be the most cautious and which will likely only have mild reactions to peanut protein.

Summary
For now, most allergists are recommending strict avoidance of foods one is allergic to. Always be sure to keep your EpiPen on hand and let others knows about your food allergies and how to help you should an emergency arise.

Food Allergy 101
A resource page explaining all of the different food allergies, food intolerances, and links to our current food allergy recall feeds.