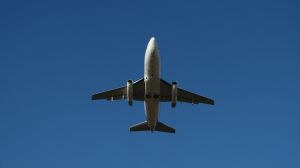 My son had an allergic reaction several years ago on a Southwest flight from Orlando to Boston.

We don’t know how or what happened. We do know that he picked up a toy off of the floor from between the seats, stood up and started to cry and itch at his face. His eyes were beginning to swell, his face was red and he started to develop hives.

We didn’t administer the EpiPen. We probably should have. We did notify the flight crew and gave our son Benadryl. He fell asleep. We’re lucky it was sleep and that he did not pass out.

When ordering tickets we notified the airline of our sons allergy. They said, “tell them when you board.”

When boarding the plane we notified the flight crew of our sons allergy.  They said, “you can ask those around you not to eat peanuts.”

When my son started his reaction and we notified the flight crew, they told surrounding passengers, “he’s just a tired fussy baby.”

When I told the flight crew that I thought our son came into contact with an allergen on the floor they said, “you should have taken an early morning flight. The planes are cleaner then.”

We have not taken a Southwest flight since and never will. Some airlines, like Air Tran, specifically do not serve peanuts. They do not ban passengers from bringing them aboard, but to minimize allergic reactions they serve pretzels instead.

It was recently announced that the Canadian Transportation Agency has ordered Air Canada to create a formal policy that includes nut- and peanut-free “buffer zones” on its airplanes when a person on board is allergic to these foods. These buffer zones will only be made available when advance notice is given regarding the allergy. Nuts will not be served in these buffer zones and passengers will be asked to refrain from eating nuts.

This ruling came after several complaints as well as a lobbying campaign organized by Allergic Living Magazine.

Many people feel that planes should be nut free when allergic individuals are on board. The risk is high and my personal experience supports that. However, this is at least a step in the right direction and hopefully in time the policies will become more strict.

If you’d like to become more involved in getting peanut and tree nuts off the planes, contact Allergic Living Magazine: