The Haunting of Sorority Row premiered last night on Lifetime television, and like many other networks–brought peanut allergy into the mix. 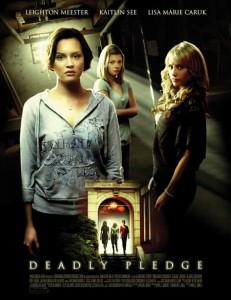 The main character Samantha is a new pledge looking to fit in. In the first fifteen minutes of the movie one of the sorority sisters asks Samantha about her peanut allergy and explains that Leslie, the head sister of the house, found out and cleared the sorority house of all peanuts. She goes on to tell Samantha that Leslie would not want Samantha to know and loves peanut butter and jelly. It’s not clear why this is brought up, but is clear that it will have something to do with the plot of the movie.

Later in the film, Samantha is forced to serve cakes on a tray at the sorority house party. Leslie takes one and Samantha walks away into another room to sneak the last one on the tray. Leslie bites into her piece of cake, makes a strange face, then finds Samantha just as she is about to bite into hers. Leslie tells her not to eat it and that there are chopped peanuts in the cake. She goes on to say it was a mistake and that someone will get fired.

Towards the end of the movie all of the girls are leaving the sorority house because horrible things are happening. Samantha vows that she will not leave Leslie alone because she “owes” her. It becomes crystal clear here why the peanut allergy was introduced into the storyline.

It’s great that the movie addresses peanut allergy and in a kind way in regards to how Leslie handled it. I was half expecting it to become a hazing issue. However while potentially realistic, it was a poor choice for Samantha to attempt to eat the cake in the first place.

The peanut allergy issue felt forced in the movie as the writers needed a way to keep Samantha around in the end to help Leslie. They could have handled it a number of ways without dealing with food allergies, or they could have written the allergy part in more substantially.

As food allergies increase it seems writers are taking notice. From cartoons to news articles to movies and prime time television-food allergies are creeping into to story lines at an increasing rate.

We want to know–what are some of the movies or shows you’ve seen food allergies mentioned in and was the mention positive or negative?