Cloudy with a Chance of Anaphylaxis 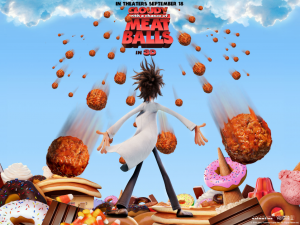 Food allergies are on the rise and it seems everyone has taken notice. Publications online and in print have recently run numerous articles, major networks have included allergy story lines, and blockbuster movies have dipped their toes into the allergy world.

The must anticipated film “Cloudy with a Chance of Meatballs” is out and allergy forums and blogs are buzzing about one of the supporting characters Sam who has a peanut allergy.

While Sam’s allergy is not a major part of the movie, it is brought up twice throughout the film. Without spoiling it for everyone, I will say in my opinion that it was handled better than I thought it would be, but not as good as it could have been.

In short, Sam mentions her peanut allergy in the first half of the movie setting up the second half in which she has an anaphylactic reaction.

The parts I think that were handled well were her mentioning her allergy/advocating for herself in a matter of fact way and her receiving her epi pen after her reaction.

The parts handled not so well in my opinion were events in between the reaction and her receiving the injection, and the overall delay of epinephrine administration. There were also two scenes between the main character and Sam regarding her allergies and the main character wanting to have allergies that I felt was unecessary. Animation being animation, the reaction itself was a little over the top.

My children both enjoyed the movie and want to now see it in 3D. My allergic son was slightly nervous during the reaction, but was okay upon seeing Sam get better. I think it was great for him to see a fictional character receive the epi pen.

Overall I think it’s great that the media and television are covering food allergies, I just wish they would make a little more effort to get it just right. So far though, this is one of the better handled allergy story lines.