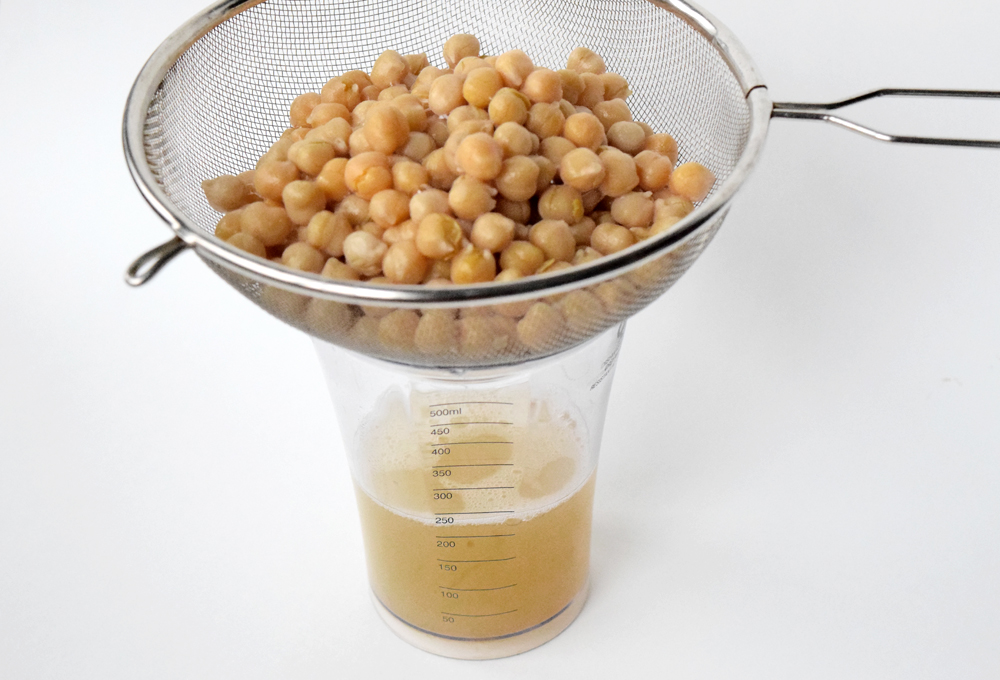 There’s an exciting “new” egg white replacer that food enthusiasts and vegans are raving about. It’s called Aquafaba, and it’s not really new, because you probably already have it in your pantry and have been throwing it out for years.

It’s the water that beans are soaked in, easily found in cans or boxes of chick peas.

In late 2014 a French blogger, Joel Roessel, experimented with vegan meringues substituting the egg white with foam of liquid from chickpeas and hearts of palms. This eventually led to vegan baker, Goose Wohlt’s discovery in February 2015 that chickpea liquid alone can be used as an egg substitute. Goose was able to make an egg-free vegan meringue identical in taste and texture to the traditional meringues. Ever since this discovery, the egg-free community has exploded with aquafaba experimentation.

3 tablespoons of aquafaba replaces 1 egg in most recipes where eggs are used as binders, such as cookies, brownies and cakes.

“It turns out that aquafaba is an excellent egg white replacer that can be used to make many recipes from meringues and macarons, marshmallows, and icings to baked goods like pancakes, cookies, cakes, and even fried batters. It also has properties that extend beyond that of eggs which allow it to be used to make plant-based butter, cheese, mayo, ice cream, and more! It’s an amazing discovery with a vibrant community.”
Source: Aquafaba.com

You can find more recipes using aquafaba through the aquafaba community.

HypeFoodie.com is an online community of food lovers with special dietary requirements. This site provides resources and recipes to people who live an allergy-friendly lifestyle, have restricted diets or have chosen to eliminate particular foods from their diet.
Newer Post
Gratefulfoodie
Older Post
Planning Play Dates With Food Allergies