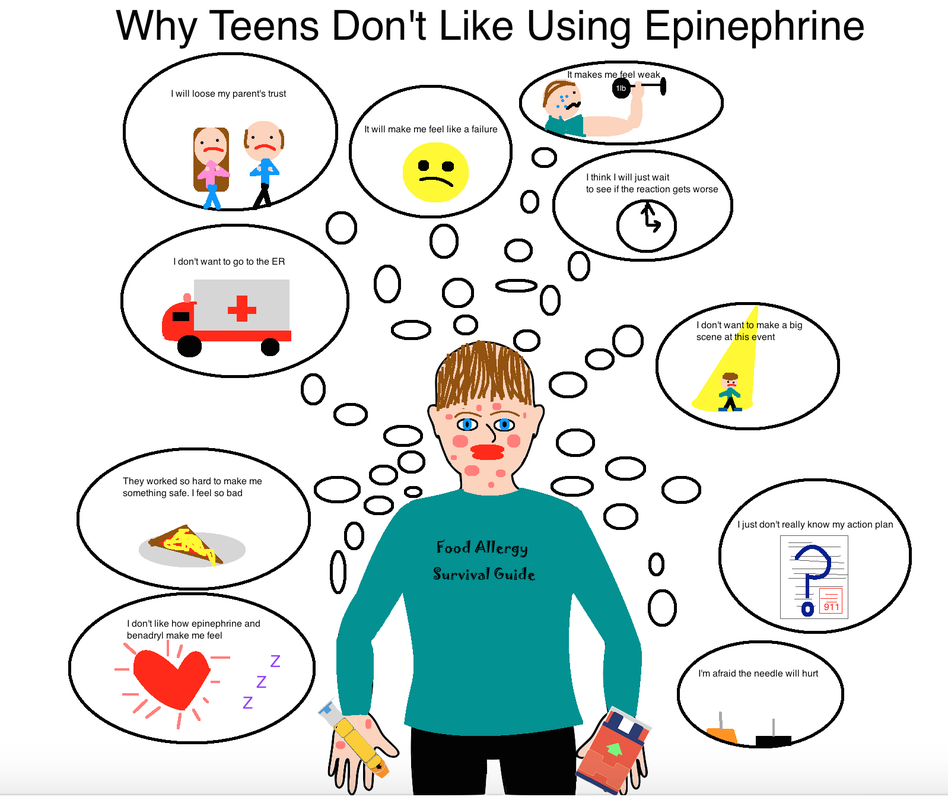 In response to a question from a parent: “My son always seems to delay the use of his epipen even though he knows he needs to use it. He carries it in his pocket so it is always right there if he needs it. He has had about 3 anaphylactic reactions since he started high school (he is a senior now) and I haven’t been there for any of them. Every time in the ER afterwards, they tell him that if he had waited longer he could have died. I just don’t understand why he delays the use of his epipen; it is so easy to use and he has done it before. Whenever I try and talk to him about it, he doesn’t want to talk. I need to figure out a way to get through to him so that I don’t have to worry about him dying from delayed epipen use in college. Could you explain to me from a teenage perspective why teens tend to avoid the use of epinephrine?”

Lily’s Response: Current research shows that during an anaphylactic reaction, early administration of epinephrine saves lives. While I know this and I am sure your son and almost all food allergic teens know this, sometimes we aren’t always the best with complying with the prompt administration of epinephrine guidelines. I don’t think it is uncommon for parents like you and doctors of food allergic teens to have a hard time understanding why this is, I mean after all it is just a shot that will make us feel better. The thing is, in the heat of the moment, a shot of epinephrine feels like so much more. I myself have had my fair share of anaphylactic reactions, and I have experienced a lot of the feelings that Anaphylactic Alex (pictured below) is feeling. Let me explain.

Imagine that you have gone to a party, let’s say prom. You are dancing with your date on the dance floor, having a fun time. All of the sudden, the buffet opens up and everyone runs to get food. You go over to the kitchen and get the allergen-free meal that the chef has prepared for you. You sit down with your friends and everyone is eating and having a good time. Then all of a sudden, you don’t feel so good; your throat feels a little scratchy. But you ignore it because you don’t want to make a scene at such a nice event so you figure you will just wait it out until it gets worse, then you will act. This plan makes perfect sense to you; you are having fun and you don’t want to leave your date behind, then you will feel like a failure of a date. You are smart though, and you stop eating the food and take a drink of water. Everyone is finished their meal and your date goes to the bathroom to wash their hands before you dance some more since they ate food you are allergic to. By the time they come back, you are feeling even funnier but you dance some more. Your face starts to itch and you are getting hives, but you keep dancing because your date worked so hard to be careful, you don’t want them to feel like it is their fault. At this point, it has been 10 minutes since the onset of the reaction and you are having trouble breathing; your lips are swollen and you are covered in hives. Your friends decide to take you over to the teachers. Reluctantly you go but you start to worry about how weak this reaction makes you look and how mad your parents are going to be and how you will loose their trust. Your teacher is smart though and takes you into the bathroom with your epinephrine pen. She says she is going to use it, but you insist you don’t need it. Gasping, you state that you don’t want to go to the ER, that you don’t like how the epinephrine makes you feel and you are afraid the needle will hurt. As you moan about it, your teacher injects you and you start to feel better. By the time you get the injection, it has been 25 minutes since the onset of the symptoms. When the paramedics arrive, they tell you that you were lucky and you probably would have died if you had waited 5 minutes more, but all you can think is that you wouldn’t have died because you are immortal.

Unfortunately, this story is all too real. Maybe the reaction isn’t happening at prom, but no matter the situation, our minds as food allergic teens seem to come up with a way to rationalize why we don’t need to use our epinephrine auto-injectors. Perhaps this ‘self-destructive’ talk is actually a way that our body protects itself. If instead of thinking “I am going to be ok” we think, “I am going to die” the situation is going to be a lot more scary and fear can make it harder to breathe.

The question then becomes, how do we balance telling ourselves to use epinephrine without working ourselves up and telling ourselves we are going to die. Before I get into how I have found a balance, I want to tell you a story about a reaction that changed my self talk.

Last march, I had an anaphylactic reaction to mango. I had brought mango to school for lunch because I didn’t think I was allergic. I hadn’t eaten mango for a year because the last time I had, my mouth got itchy and I got bumps all over my tongue. I figured it was just oral allergy syndrome so I avoided the fruit for a year. The day I packed the mango for lunch, I figured my seasonal allergies were doing better then they were the last time I ate the mango, so I thought I could tolerate it and the worst thing that could happen would be an itchy mouth. I was wrong. I ended up in full anaphylaxis just as I was finishing my mango. I could feel my heart rate rise and I started seeing stars (due to lack of oxygen and low blood pressure). I got help immediately. I didn’t pretend it wasn’t happening, I didn’t think about the ‘consequences’ (parents being upset, making a big scene, etc.), I just focused on getting the epinephrine in me because I couldn’t breathe. I probably had the first dose of epinephrine within 5 minutes of the start of the reaction and the second one within 15 since the swelling came back up. When the ambulance came, I let out a short, “I don’t want to go!” but I knew I had no choice so I complied. When my mom met up with me and my grade dean at the ER, she wasn’t upset rather she was happy to see me still ok (even though I was pretty loopy from the iv drugs). A few months later, I was running 911 calls with our local ambulance squad as a volunteer EMT, when the paramedic asked me what the pouch on my belt was for. When I told him it was for my auvi-qs, he asked me my allergies. When I told him, he asked where I went to school because they sounded familiar. Then he told me he was the one who took me to the ER (neither of us recognized each other because I was swollen at the time so I looked different to him and my swollen eyes made it hard to see what he looked like.) He told me if I had waited 5 or 10 minutes longer my heart might have stopped and at that moment, I knew I needed to treat every reaction the way I treated that reaction because my lack of rationalization saved my life.

You see the difference between the first scenario and the second was that I ignored any ‘feeling’ thought. I didn’t tell myself I was going to die if I didn’t hurry up, but I also didn’t tell myself that I would be ok to wait it out. Part of the ability to be able to stop thinking in emotional terms takes practice and skill. I didn’t really notice I was rationalizing the delay of epinephrine until my teachers and parents pointed it out. You may need to try and point this out to your son. That being said, even once you point out your son’s rationalizing behavior, he still may need to practice not “feeling” during a reaction until it becomes second nature. Luckily, learning to resist the emotional side of an anaphylactic reaction doesn’t mean you need to have an anaphylactic reaction to practice. I get a lot of practice as an EMT when I see really sick people and I have to treat them without getting emotionally involved. I guess a way to practice could be watching sad movies and trying not to cry. I am not saying that you or your teen should become a heartless person, but I am saying, separating emotions from knowledge could result in faster epinephrine delivery.

I hope this helps you and other parents understand their kids better. Chances are, they aren’t putting off the epinephrine because they are lazy or incapable of giving it to themselves, rather their brain is protecting them from PTRD (post traumatic reaction disorder) by saying, “this reaction isn’t too bad, you will be ok.” Which in turn makes them feel like they can delay epinephrine. So instead of feeling frustrated by your teen’s lack of motivation to use epinephrine in a prompt matter, take a moment to understand why they feel this way and help them talk about how they can get past their brain’s protection system.

Teens, if you are an epinephrine delayer, I hope this helps you understand a possible reason for why you delay. If you are having a reaction and you start to think thoughts that you know are going to keep you from using your epinephrine, close your eyes and picture yourself flicking the devil off your shoulder that is making you feel guilty about using your epinephrine so you can just listen to the angel telling you to use it because you need it. Then use your epinephrine pen.