FDA Revises Instructions On How To Use EpiPens

Epinephrine, also known as adrenalin, is the primary emergency treatment in severe life threatening allergic reactions causing anaphylaxis. Epinephrine is most commonly administered with an epinephrine auto-injector into the thigh muscle.

In May 2016 the U.S. Food and Drug Administration (FDA) announced changes to the safety labeling for EpiPen®, EpiPen Jr® and other epinephrine auto-injectors.

Here are the 3 main changes made to the instructions for Administration with additional Warnings and Precautions:

Lacerations, bent needles, and embedded needles have been reported when EpiPen and EpiPen Jr have been injected into the thigh of uncooperative young children who kick or move during an injection. Caregivers must hold the child’s leg firmly in place and limit movement
prior to and during injection to minimize the risk of injury.

Hold the patient’s leg and keep the leg steady while you inject the epinephrine.

2. Hold the EpiPen® or EpiPen Jr® firmly in place for 3 seconds when injecting

The labeling change says three seconds with auto-injector in the outer thigh is enough time to administer the full dosage of epinephrine. Previous instructions said to hold the EpiPen in place for ten seconds.

3. See a doctor for signs of infection at the injection site

Additional details advising people to seek medical care for anyone experiencing signs or symptoms of infection, such as persistent redness, warmth, swelling, or tenderness at the epinephrine injection site. Cleansing with alcohol may reduce presence of bacteria on the skin, but alcohol cleansing does not kill Clostridium spores. To decrease the risk of Clostridium infection, do not inject EpiPen into the buttock. 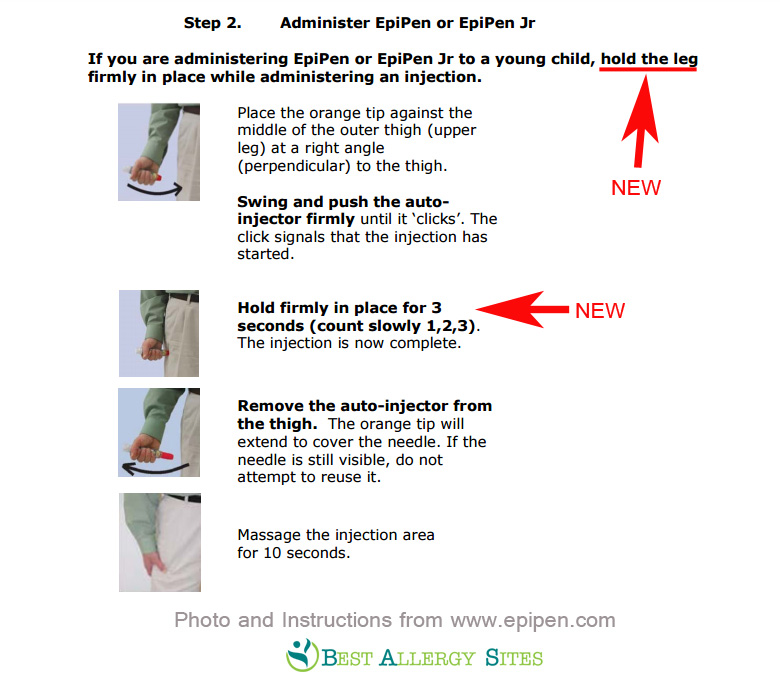 Read the full Patient Information and Instructions for use document.

If you have any questions, speak with your healthcare professional.