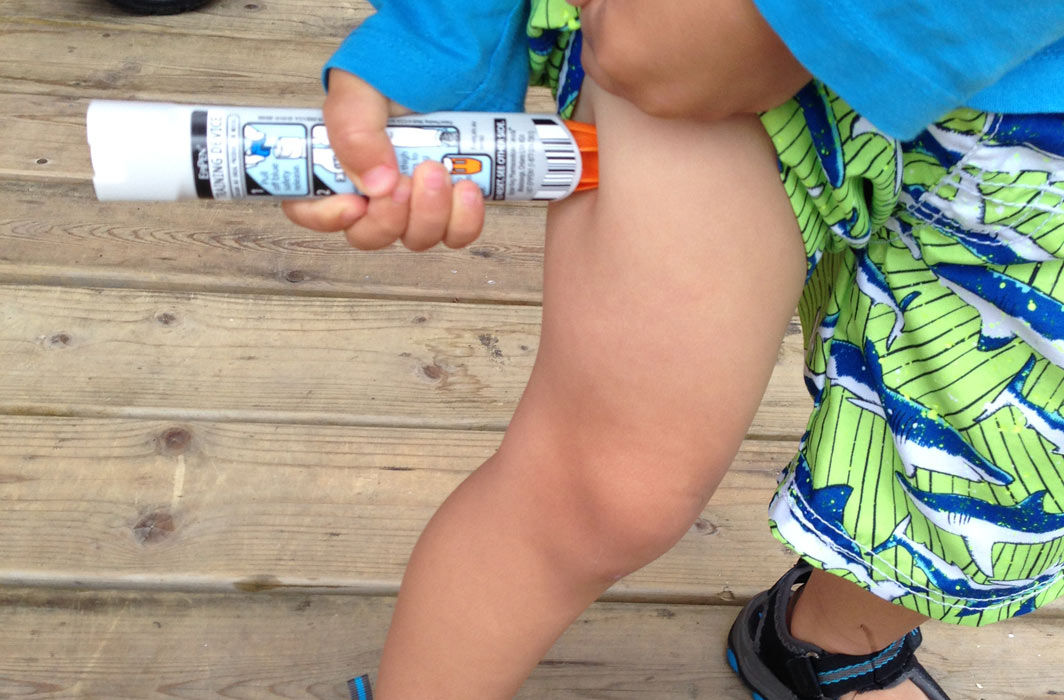 By now most people have heard about the tragic death of Oakley Debbs, an 11 year old tree-nut- allergic, asthmatic boy who died as a result of an allergic reaction on Thanksgiving Day. I can’t get Oakley out of my mind.  The death of a child is always devastating, but this one hit me hard.  You see this boy could have been my 11 year old tree-nut-allergic, asthmatic son.  In fact, it almost was. The only difference between me and Merril Debbs is that a few years ago I became informed … The hard way.

I used to be that allergy mom; the one who avoided products that listed tree nuts as an ingredient, but was ok with products “Manufactured in a facility that also produces tree nuts.”  I was the one who gave Benadryl as a first defense against hives and itchy tongue. And when my son accidently ate Nutella (a hazelnut product) and his face turned bright red, I listened when the allergist said, “Watch and see what happens.”  I was lucky in those instances, and my son was ok … Until he wasn’t.

It is only after you watch your child struggle to breathe, and you see his symptoms progress from one hive to full-blown anaphylaxis in a matter of seconds that you can understand the urgency of immediate use of epinephrine.  And once you administer that shot, counting slowly to 10 through your child’s deafening screams, and you witness the hives disappear as quickly as they appeared, the sound of his breathing return to normal and the swelling of his lips subside, do you realize that you just saved your child’s life with this magical pen.

The first time this happened to my son he hadn’t eaten any nuts.  He had a container of yogurt. The same yogurt he had had a hundred times before.  But, this one had a sprinkle topping, and those sprinkles had been made in a factory that also manufactured other toppings, including nuts.  A few things happened after that day.  First, the allergist who said, “‘Made in a factory’  is ok” is no longer our allergist.  Second, our standard for what is safe has changed; and third, the Epi-pen is now our first line of defense.

In searching for a new allergist I discovered something; there is no well-defined, written standard for when to administer epinephrine.  In fact, the Journal of Allergy and Clinical Immunology states that, “Although there is little debate about using epinephrine to treat a SCIT SR [anaphylactic reaction] there is a lack of consensus about when it should be first used.”

WHAT?  How is that possible?  How is there not a standard protocol for saving a child’s life?

How is it that the American Academy of Allergy and Asthma Immunology states that “Anaphylaxis is a potentially life-threatening condition, requiring immediate medical attention. Most fatalities occur due to delay in delivery of the needed medication”, yet, at the same time, the Academy does not commit to a solid plan for when the Epi-pen should be used?  This lack of commitment is reflected in the vagueness of the plan of action provided on the Academy’s website.  On the other hand, the action plan provided by the non-profit organization, Food Allergy Research and Education (FARE), is much more specific in identifying reactions and in outlining the timeline. Why does a grassroots effort, by its willingness to define the steps to take during an allergic reaction, seem to know more than our doctors?

Anyone unfamiliar with epinephrine may question the side effects following its use. There are several, including fast, irregular or “pounding” heartbeat, sweating, nausea or vomiting, breathing problems, paleness, dizziness, weakness, shakiness, headache, feelings of over-excitement, nervousness and anxiety.

There are two primary reasons why patients are required to visit the ER immediately after epinephrine administration:

I would venture to guess that any parent who has saved their child’s life would tell you that four hours in a hospital and some dizziness is no expense.

After my son’s latest allergic reaction, most likely to some type of cross contamination at a restaurant, my allergist said, “This is why you have the Epi-pen, so you don’t have to live in a bubble.”  She is right. Yes, I am on top of every food item I buy, and I have trained my son to be just as diligent in checking his food. But can accidents happen? Of course. We eat at restaurants, he goes to sleepaway camp, we travel on vacations, and we do not live in a nut-free world.  That is why we have Epi-pens. They save lives.  But there is a window of time during which they are effective.

As the parent of an allergic child, I am mystified by the fact that allergists in this country do not practice according to an approved set of guidelines, and that parents are commonly not properly informed by their doctors, while children are still dying from allergic reactions.

Merrill Debbs has created a foundation, Red Sneakers for Oakley, by which she is trying to turn her tragedy into something positive. She was not informed; let’s make sure this never happens to anyone again. Allergy parents need to do their research, find a good allergist, have a clear action plan, and always remember that epinephrine, when used properly and in a timely manner, saves lives!

Gayle Schreiber is a former teacher and a camp director. She is also fiercely passionate about food allergy awareness and preventing tragedies related to anaphylactic reactions, as her 11 year old son has a life threatening tree nut allergy, as well as active asthma and severe environmental allergies. She earned a BBA from the University of Wisconsin - Madison and a MA from Columbia University - Teachers College. Gayle and her husband, David, own Club Getaway, a camp resort in the Berkshire mountains where Gayle directs the children's program and manages all food allergies. Gayle and David live in Ridgefield, CT with their two children.
Newer Post
Rich Products Corporation Issues Nationwide Allergy Alert on Undeclared Walnuts in Certain Ice Cream Cake Products
Older Post
VanLaw Food Products, Inc. Announces Voluntary Recall of WinCo Brand Ranch Dressing